An economic indicator presents information on the phase of the overall economy. Economic indicators consist of data on an economy’s recent past activity or its current or future position in the business cycle.

In the United States, The Conference Board regularly issues several indicators that investors and policymakers broadly pursue. These indicators are as follows:

3- Change in labor cost per unit of output, manufacturing (%)

Analysts generally consider overtime decline a negative signal for the labor workforce; possible layoffs may follow the trend. Overtime increases, on the other hand, are regarded as cyclical upturn and rehiring possibilities. 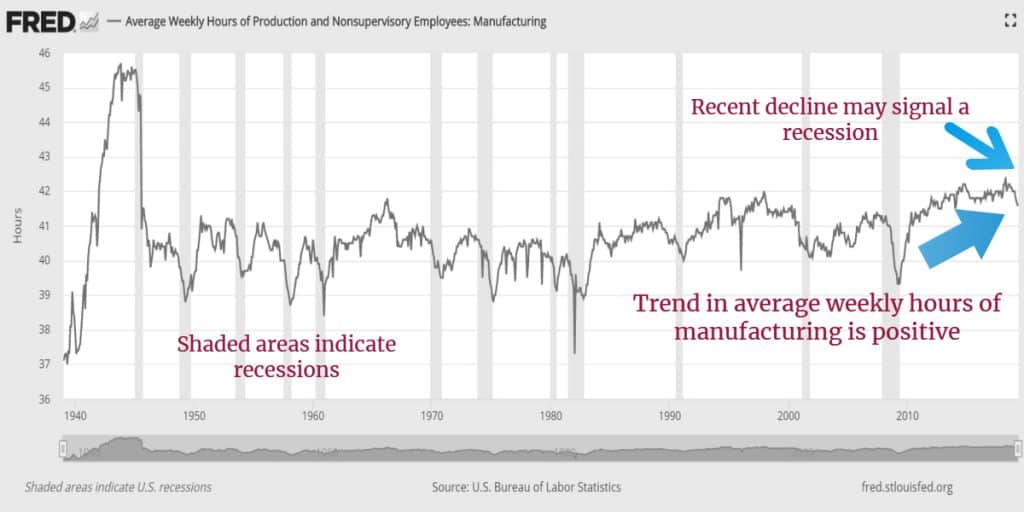 Average weekly initial claims measure the number of unemployment applications filed by persons looking to receive jobless benefits. The U. S. Department of Labor’s Bureau of Labor Statistics collects these claims in the US and adjusts for seasonal variation. This indicator represents a more sensitive signal for initial layoffs and rehiring. 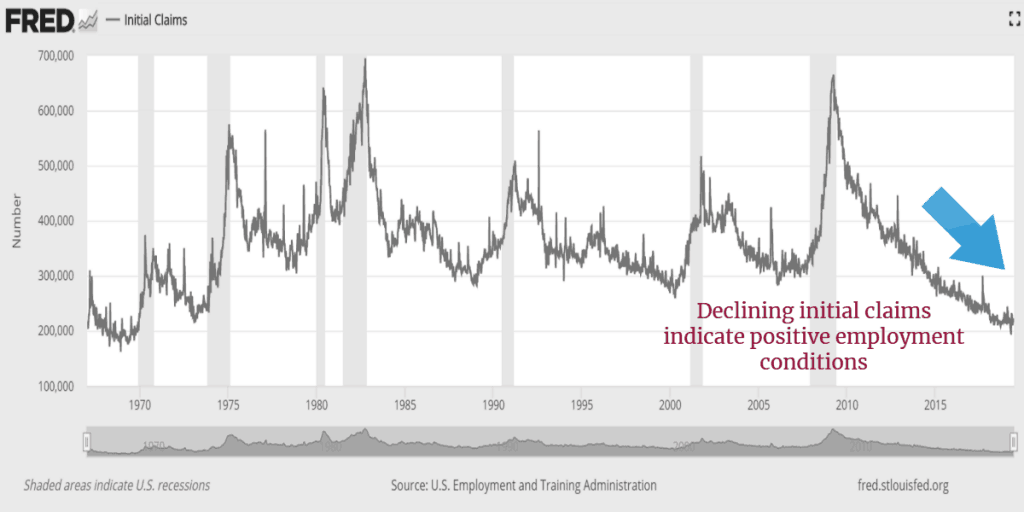 Increases in new orders may indicate production surges and upturns in the economy. 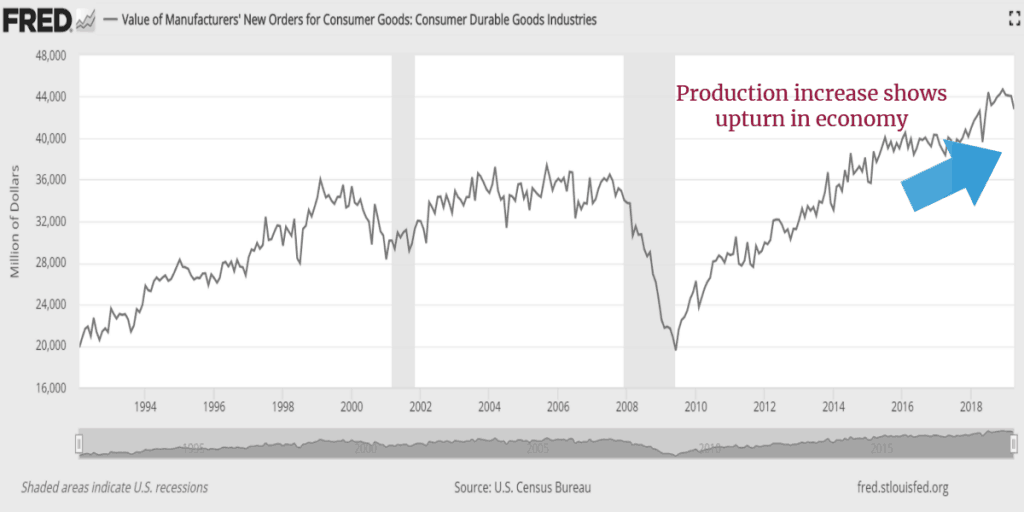 This factor reflects the month-to-month difference in new orders for final sales, which measures the time the industrial companies receive deliveries from their suppliers. The National Association of Purchasing Management surveys purchasing managers about the delivery speeds of their suppliers comparing the previous month.

The weakening of demand may speed up the deliveries and may signal a possible recession. 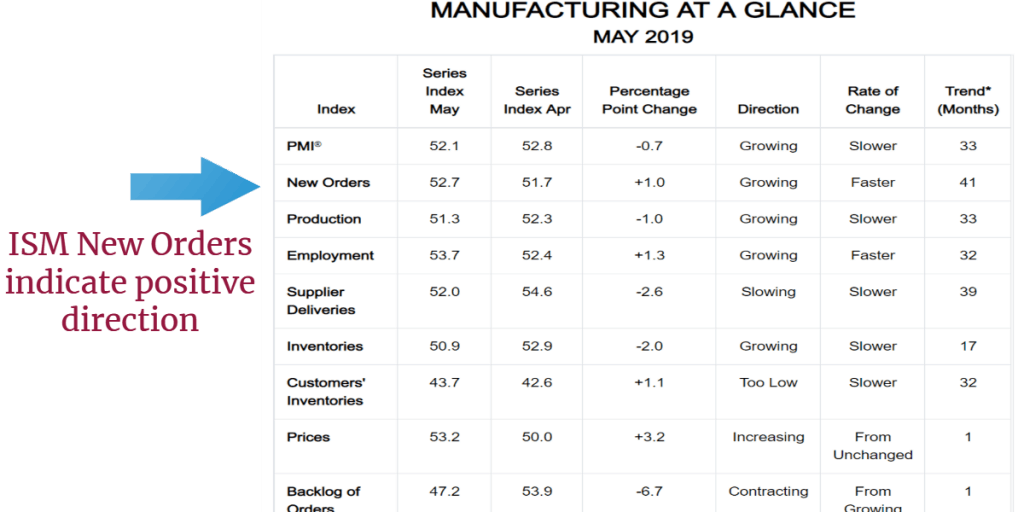 Increases in new orders may indicate production surges and upturns in the economy. These new orders also imply business expectations. 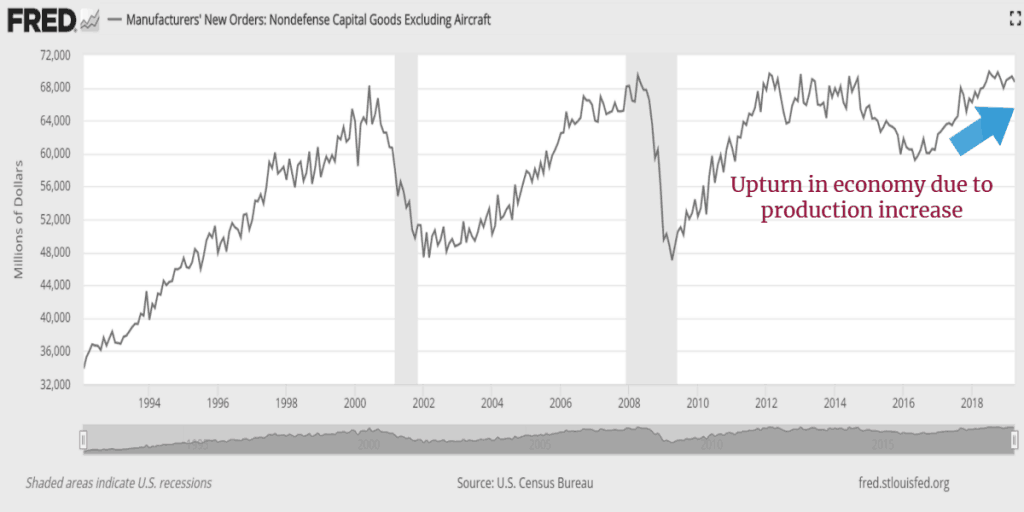 This series measures the monthly change of new residential housing permits. The Census Bureau surveys all new residential construction in the United States. The data is adjusted for seasonal variation. 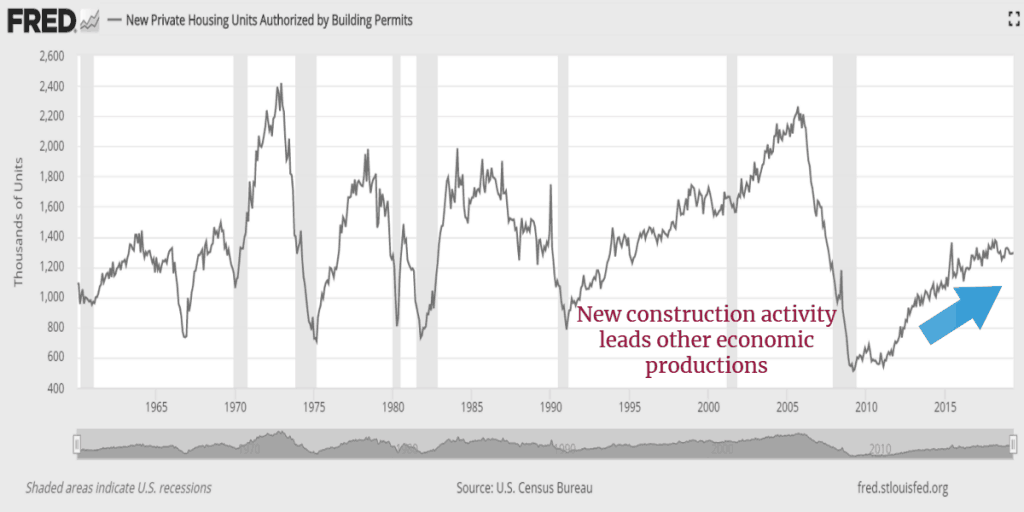 This indicator expresses a useful early signal on economic cycles. 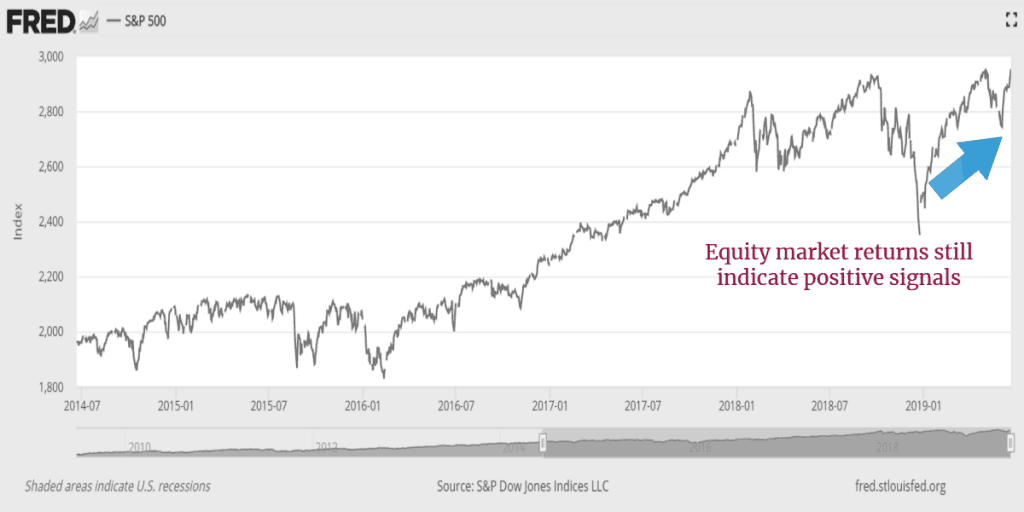 When the money supply does not match inflation, bank lending may deteriorate and generate adverse shocks. This indicator may result in a deep recession for the economy. 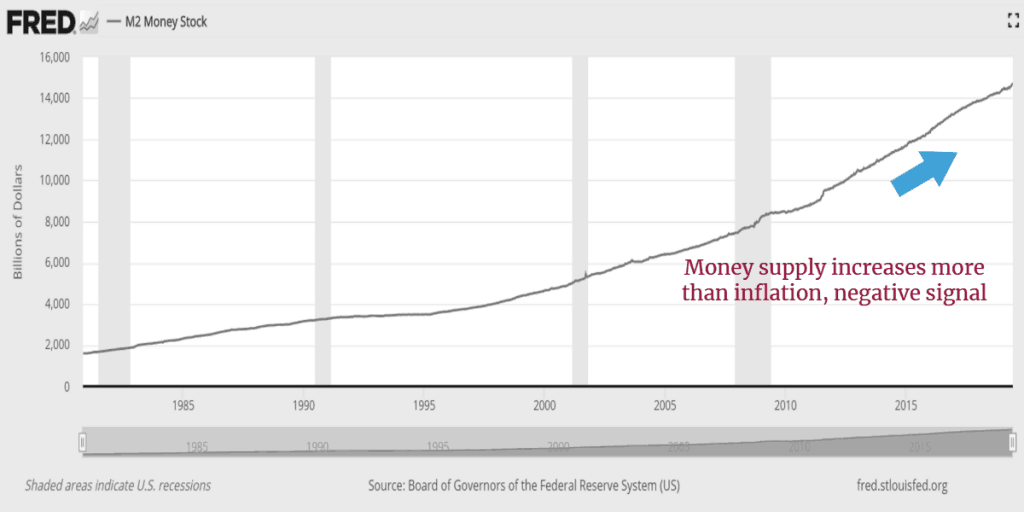 This interest rate spread is the difference between the 10-year Treasury bond rate and the Federal funds rate. Generally, long-term yields indicate market expectations about the path of short-term interest rates. 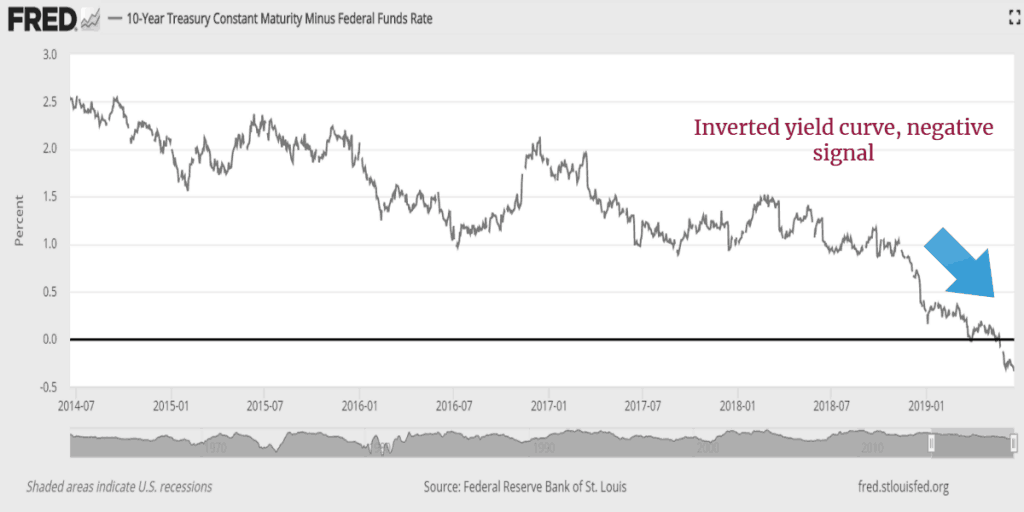 This series is the only leading indicator that is based on expectations. The University of Michigan’s Survey Research Center surveys a minimum of 500 American households and asks about consumer sentiments regarding personal finances, business conditions, and buying conditions.

Consumers tend to increase their spending when they are optimistic about future economic conditions. Consumer consumption represents more than 65% of the US economy. This index suggests an early direction about the economy. 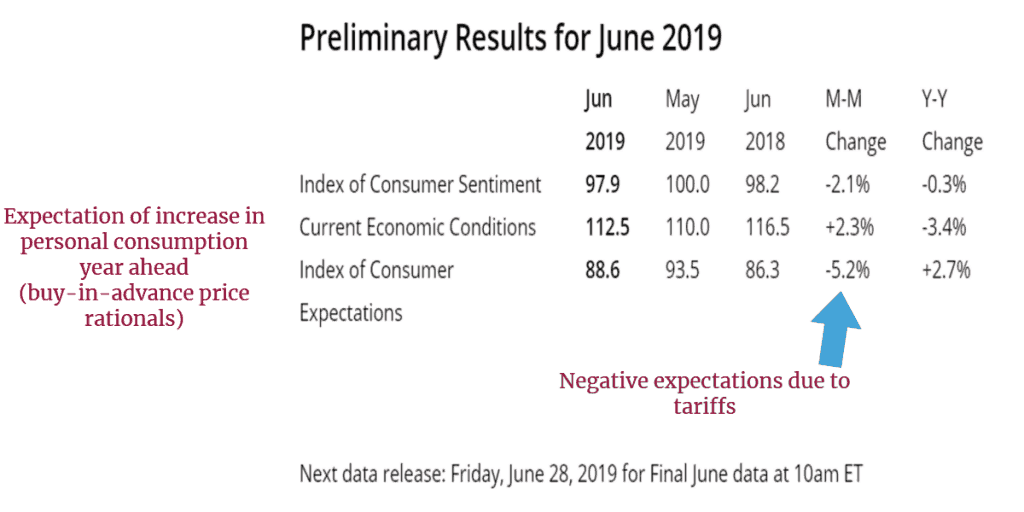 This series refers to both full-time and part-time workers except for farm work. The Bureau of Labor Statistics releases monthly data on the first Friday of the following month.

Businesses adapt their actual net hiring and firing according to the recession or recovery phase in the economy. Analysts closely track series for assessing the health of the economy. 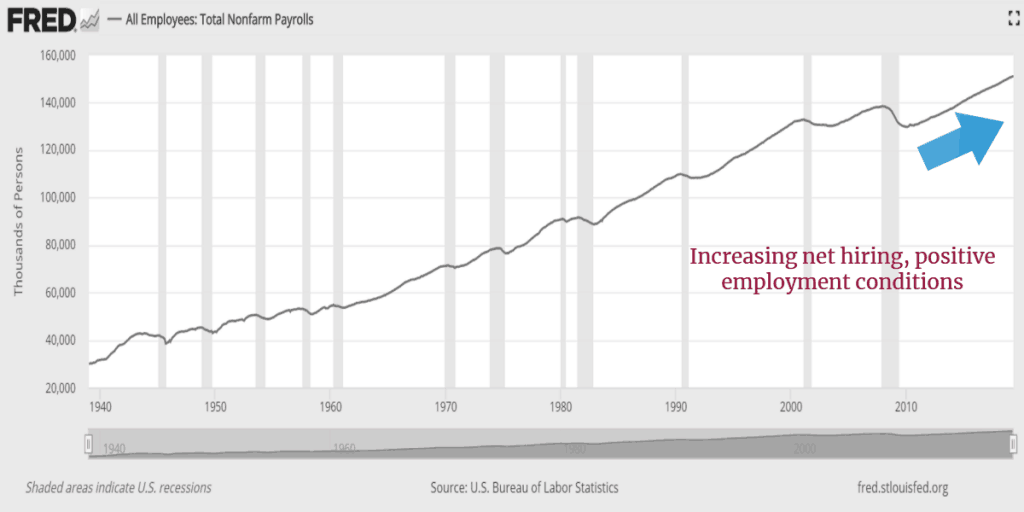 Personal income includes payments to individuals and non-corporates such as income from wages and salaries and other earnings but excludes transfer payments from governments such as Social Security payments.

The US Bureau of Economic Analysis publishes monthly data on the last Friday of the current month. This measure captures the current phase of the economy. 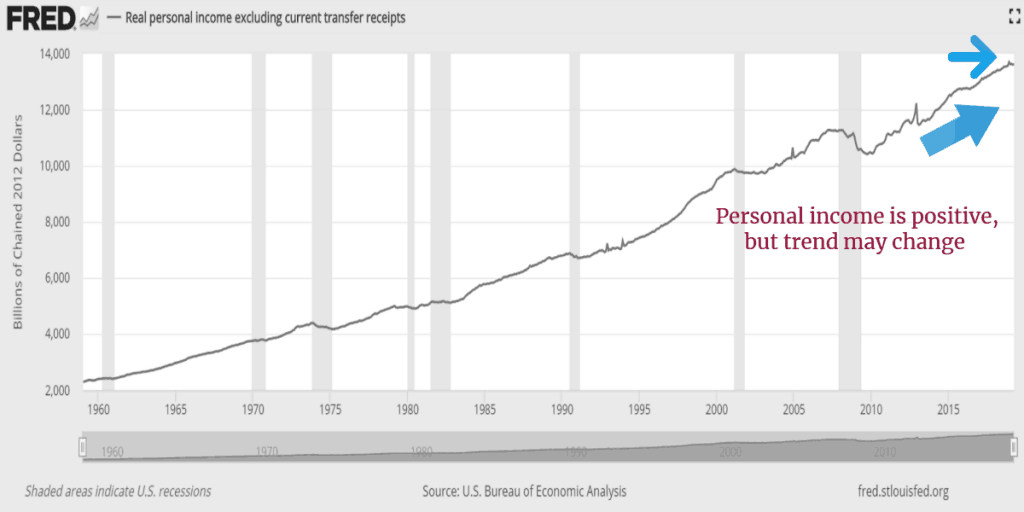 This indicator captures the output of productions in the manufacturing, mining, and utility industries, which are the most volatile part of the economy. The service sector is generally not used as an economic indicator due to its stable trends. 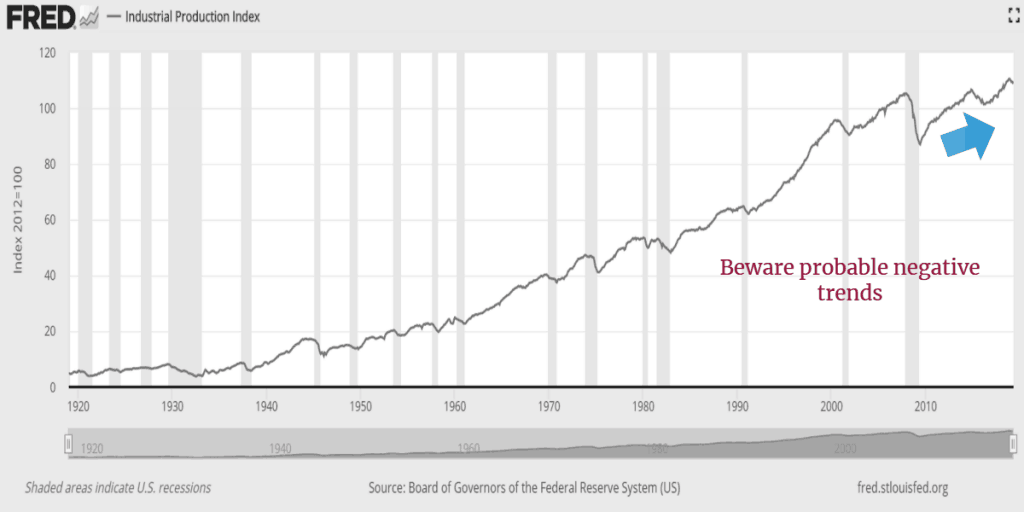 This indicator tracks sales at the manufacturing, wholesale, and retail levels. This series represents a measure of the current phase of the business activity but is much more volatile than other coincident economic indicators due to procyclical actual total spending. 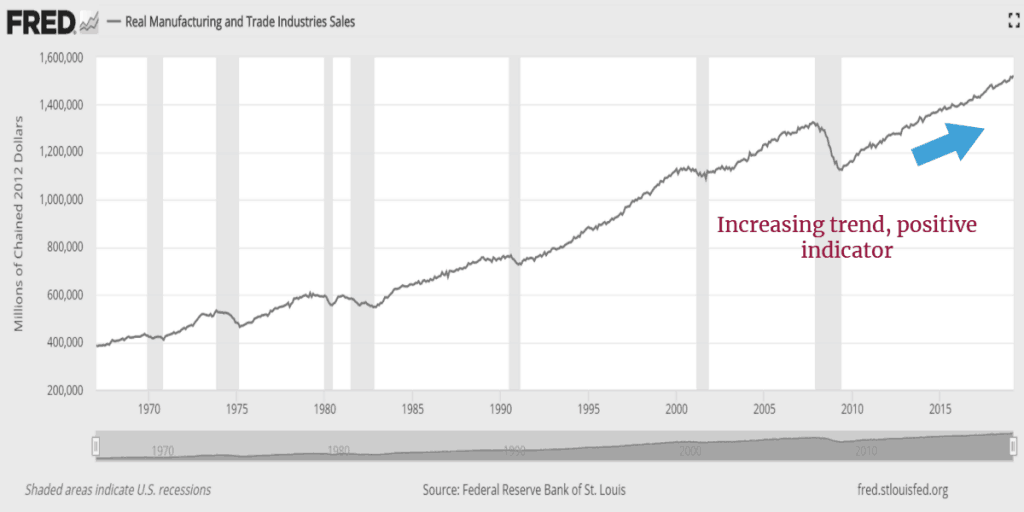 This aggregate measures the average duration of unemployed individuals.

Businesses tend to delay the layoff processes until recessions undoubtedly affect their work and postpone the rehiring process until recoveries seem guaranteed. 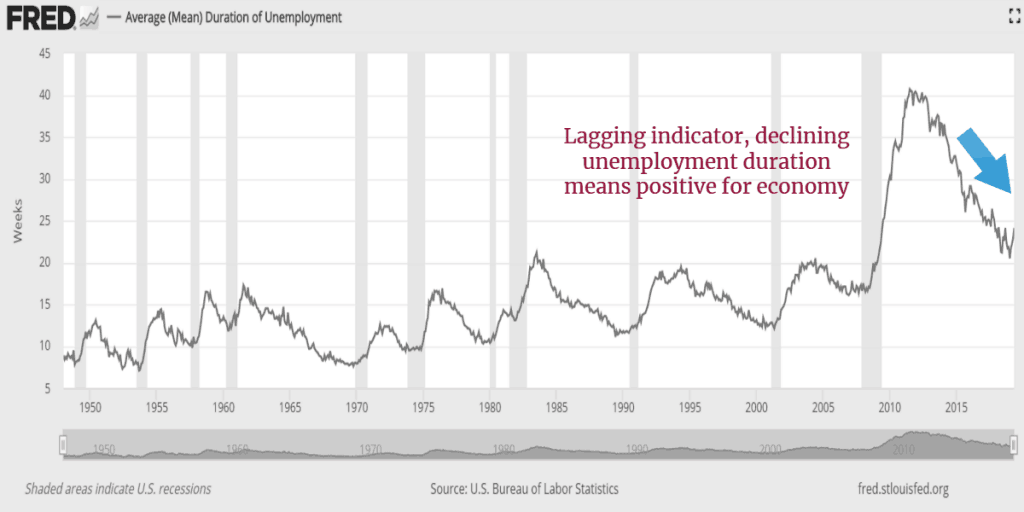 The Bureau of Economic Analysis uses inflation and seasonally adjusted inventory and sales data of manufacturing, wholesale, and retail businesses.

Inventories tend to accumulate as sales decline, which means the ratio increases during the recession phase. Declining inventory levels and increasing sales reflect an expansion. Due to businesses’ delayed reporting, this ratio is assessed as a lagging indicator. 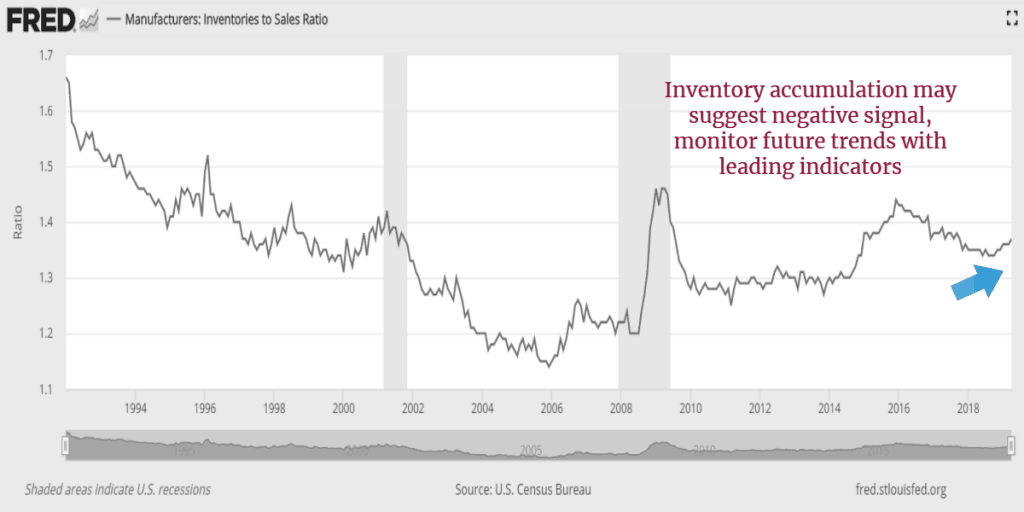 3- Change in labor cost per unit of output, manufacturing (%)

Manufacturing businesses volatile part of the economy, and these are used as a good indication. Companies tend to delay laying off employees, resulting in increased labor costs in the early stages of a recession. Labor costs also surge as the labor market gets tight and increasing wages during the late stages of recovery. This indicator helps to determine cyclical turns, but with a lag. 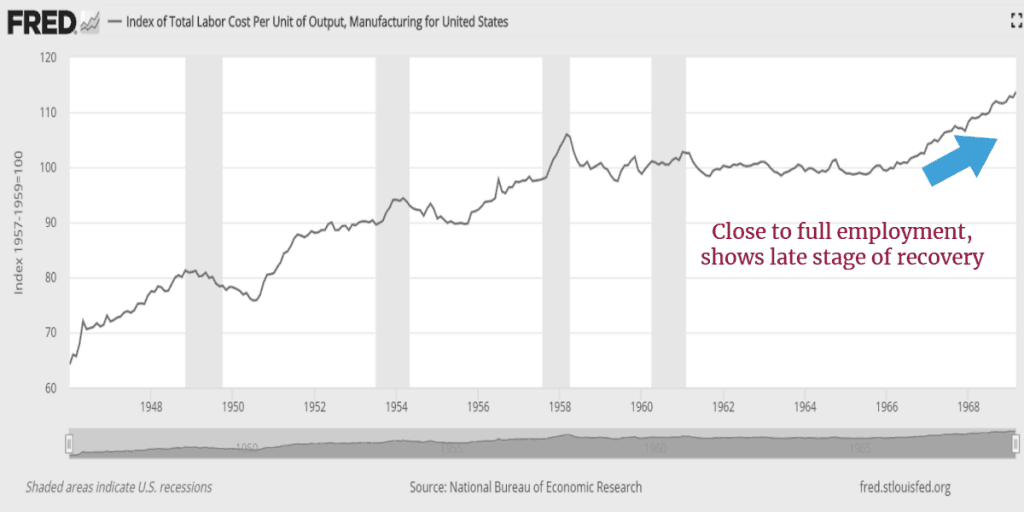 A prime rate is charged to a bank’s least risky borrowers and used as a benchmark for other types of loans. This indicator generally lags behind cyclical turns. 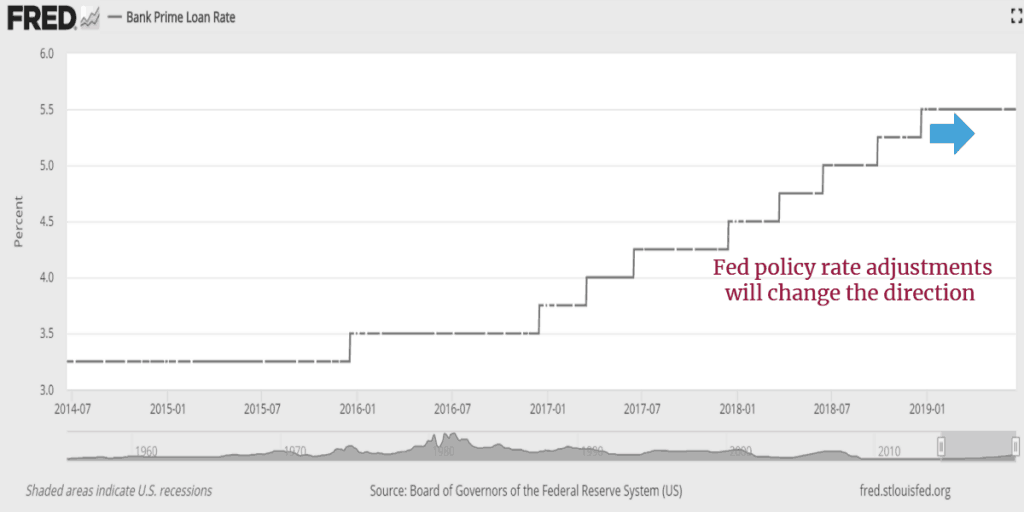 These loans tend to peak during recessions and decline after the end of the recession. 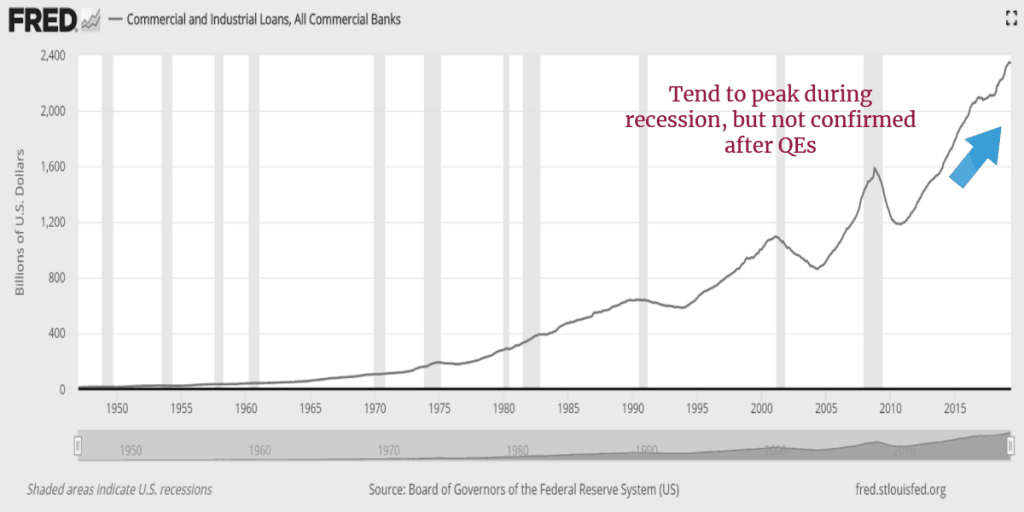 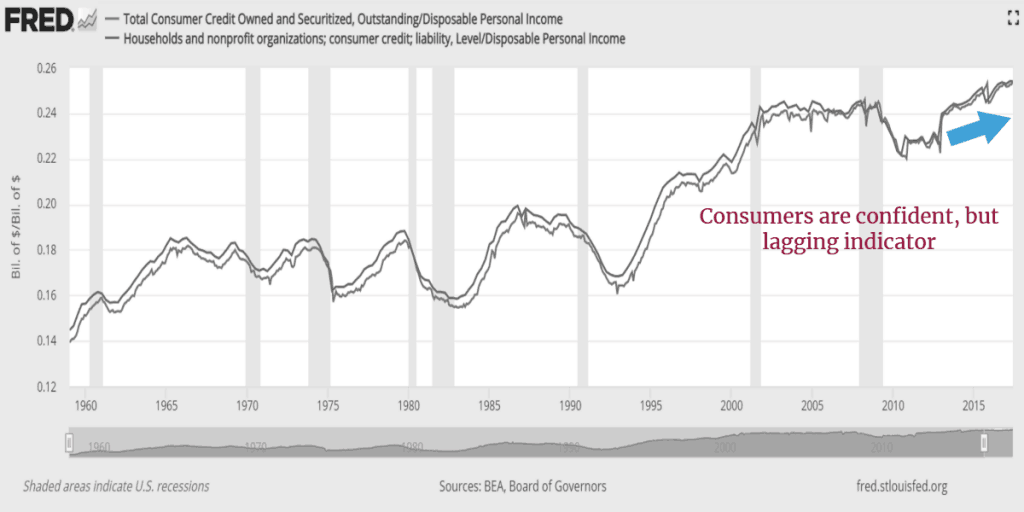 This indicator measures the inflation rates of the services sector. Inflation generally adjusts to the cycle late, especially in the more stable services area. 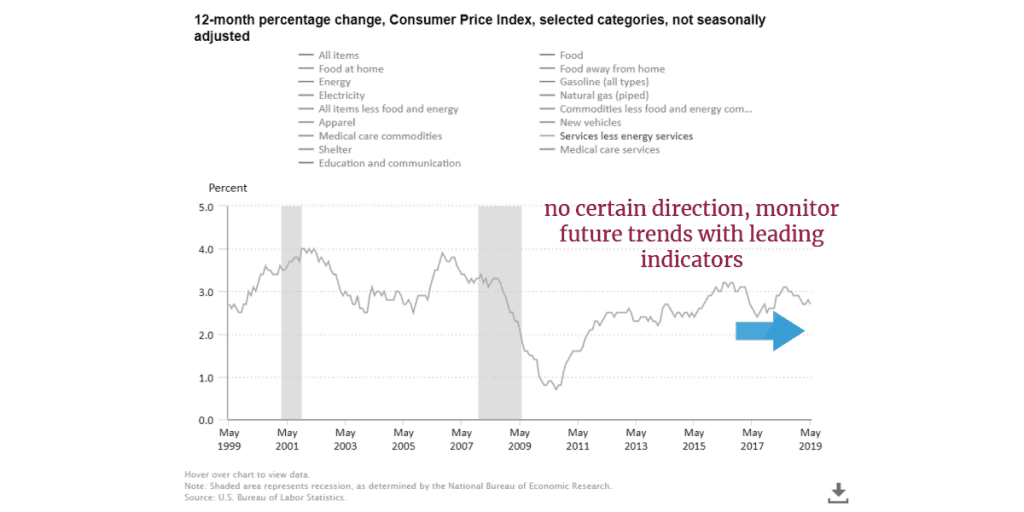 Sources: The Conference Board, The Federal Reserve Bank of St. Louis, CFA Institute, Institute for Supply Management, The University of Michigan – Surveys of Consumers.

BrightHedge aims to help you become more knowledgeable about financial and investment areas to support you ability to manage your portfolio and to understand the financial issues better.

Whatever the purpose of an investor, having basic understanding of hedge helps to develop risk mitigation strategies.

We inspired to provide articles in order to assist bright investment decisions for decision makers as described in mosaic theory.

Get latest financial analysis and investment insights of BrightHedge straight to your inbox.